Markets in a Minute: Recession? Does it Matter?

As economic growth cools and inflation heats up, we are hearing more about recessions. Let’s talk recession and what’s happening with the latest GDP report.

Recession? Does it matter?

Last week, the Bureau of Economic Analysis reported that the US economy was estimated to have declined for the second quarter in a row, after adjusting for inflation. The data release prompted the word “recession” to spring up in headlines right and left, leaving some investors wondering if they should head for the hills. But before anyone hits the panic button, remember that by the time a recession is actually called, most of the damage in the markets has already happened.

What do we actually know about economic growth? 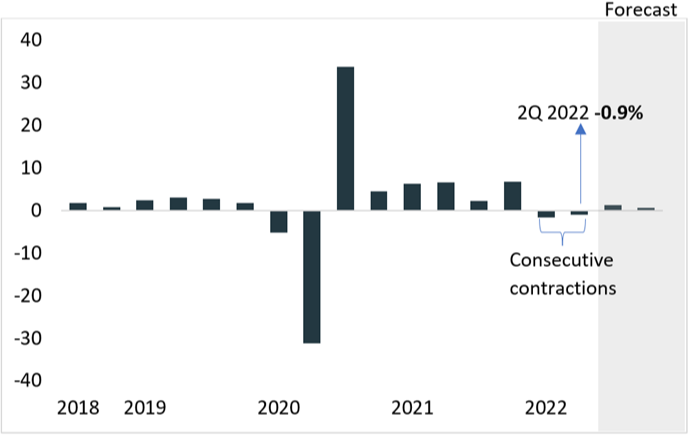 What exactly is a recession anyway? (Nerd alert! Feel free to skip the following if you’re not interested in the nitty gritty.)

Should investors care if and when a recession is called? There are reasons to not pay too much attention.

“Wall Street indexes predicted nine out of the last five recessions! And its mistakes were beauties.”
- Paul Samuelson, winner of the Nobel Prize for Economic Sciences

With the S&P 500 having fallen more than 20% from its peak, the market has already priced in significant slowing of economic activity. Investors should do well to remember that the stock market is willing to sacrifice being wrong in favor of being quick, whereas the BEA and NBER choose accuracy over timing. So, the official signal that the economy is in recession often comes when it doesn’t matter anymore to the market.

Instead of worrying about recessions, we recommend a back-to-basics approach that ensures portfolios are properly diversified and take a level of risk that makes sense for the individual’s goals, risk level and time horizon. Focus on companies with attractive valuations and high-quality earnings. These types of businesses have a history of withstanding short-term vagaries in the market and reliably delivering returns to shareholders even when the road gets bumpy.

As we’ve written before, and likely will again, if you’re fretting about market gyrations, take your portfolio in for a checkup. Your advisor can ensure that your portfolio is properly aligned with your risk tolerance, which is key to meeting your financial goals.